The eight finalists of the Global Cooling Prize were announced on 15th November 2019.

This international innovation competition led by the Government of India alongside the Rocky Mountain Institute (RMI) and Mission Innovation is spurring the development of super-efficient and climate-friendly residential cooling solutions for homes. The finalists have been awarded US$200,000 each to develop and ship their prototypes to India for testing in the summer of 2020.

The finalists were awarded from amongst 139 teams from 31 countries, who showcased technologies that have 5x less climate impact, advances that will be vital as the number of room air conditioners (RACs) nearly quadruples by 2050. The finalists are developing a wide range of technologies, including smart hybrid designs of vapor-compression, evaporative cooling designs, and solid-state cooling technologies that use little or no global warming refrigerants. 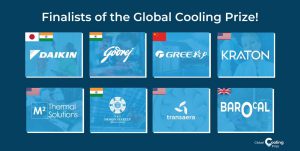 “It gives me immense satisfaction to say that we have received some absolutely revolutionary cooling ideas,’’ said Sir Richard Branson, Founder and CEO of the Virgin Group and global Ambassador for the Prize. “What makes this competition especially exciting, is the market transformation opportunity. It could be one of the biggest technology-based steps we can take to arrest climate change. Congratulations to the finalists of the Global Cooling Prize. I look forward to following all of you on your journey to winning the Prize and scaling your solutions globally.”

Population growth, urbanization, and rising income levels, compounded by a warming planet, are driving unprecedented growth in demand for comfort cooling globally from 1.2 billion room air conditioners (RACs) in the world today, to a projected 4.5 billion by 2050. The Global Cooling Prize is supporting breakthrough cooling technologies that could have the potential to prevent up to 75 gigatons (GT) of CO2-equivalent emissions by 2050. Under the business-as-usual scenario, a recent report by the International Labor Organization (ILO), suggests that productivity losses to the global economy from heat stress could reach $2.4 trillion a year — equivalent to 80 million full-time jobs. Lost productivity from extreme heat in India alone could exceed $450 billion by 2030.

The Minister of Science and Technology, Government of India, Dr. Harsh Vardhan, who awarded the finalists, said: “Innovation is the foundation for development and growth. This important initiative aligns with the objectives of the India Cooling Action Plan that the Government of India officially released this year to bolster our R&D efforts in global climate leadership and strengthens our commitment to accelerate clean energy innovation as part of Mission Innovation’s international platform.”

The winner of the Global Cooling Prize will be announced in November of 2020 and awarded more than US$1 million in prize money. For more information on the finalists visit – https://globalcoolingprize.org/