| Our work | Tracking Progress
A founding principle of Mission Innovation (MI) was the commitment by all members to seek to double their clean energy innovation investments over five years in selected priority areas. Each member — according to its own priorities, policies, processes, and laws — independently determines the best use of its funding and defines its own R&D priorities and path to reach the doubling goal. In many cases, MI members prioritise parts of their whole energy innovation budget within their baseline.

Every year the MI Secretariat asks members to report on their clean energy activities and investments against their Mission Innovation baseline. Investments by reporting members [1]against their MI baselines have increased by USD 1 billion in the first year, by over USD 3 billion in the second year of MI, approximately USD 4.8 billion in the third year, and about USD $4.9 billion in the fourth year. The fourth-year increase corresponds to a 60% increase in investment above the baselines of those MI members that reported. You can view the latest reporting by members in the latest Country Highlights report and read an overview of MI’s impact to date in The Story So far: 2020 Impact Report. 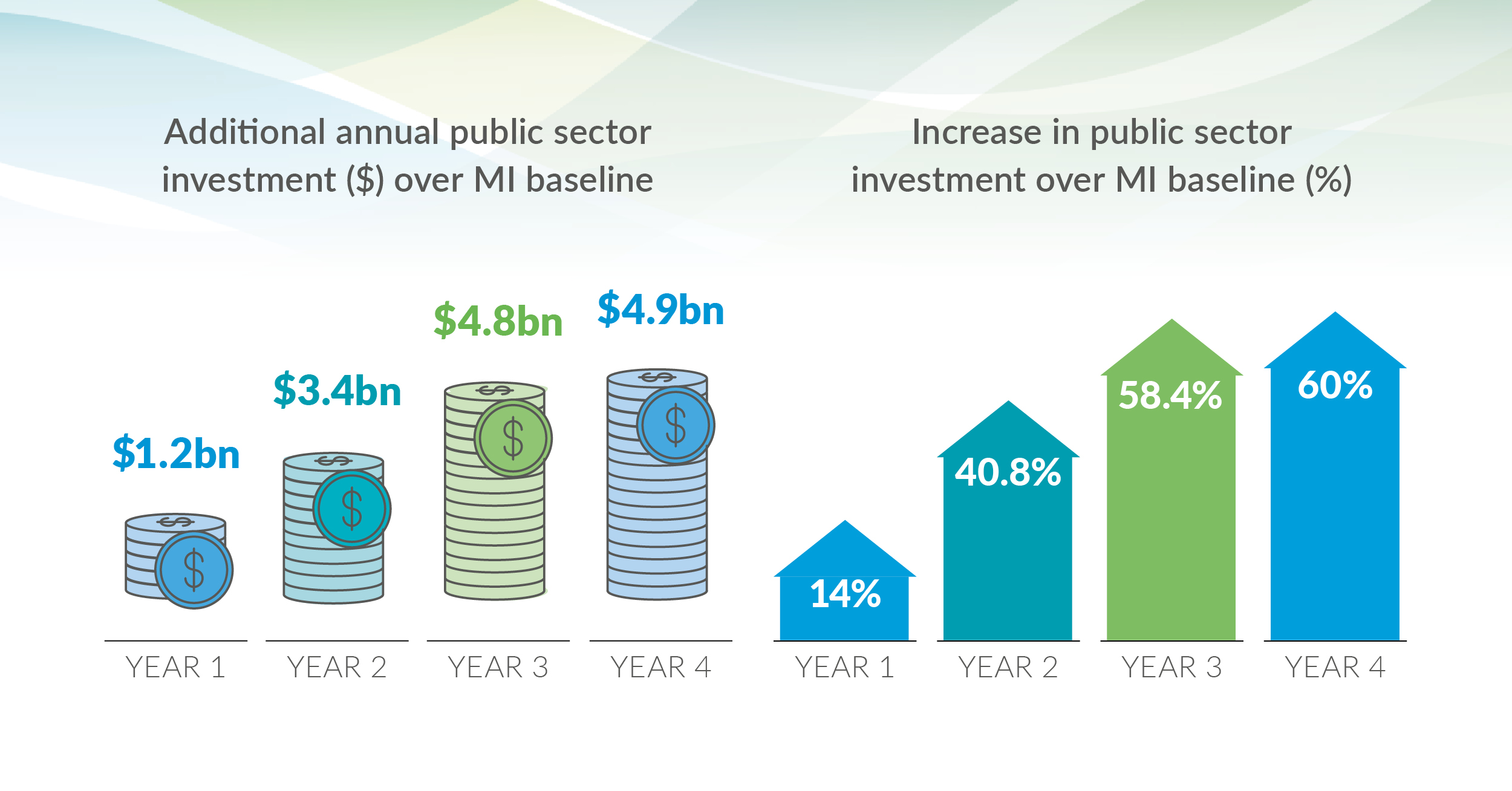 Mission Innovation and the IEA report different data and investment levels cannot be directly compared. The definition of “clean energy” in the context of MI (see Table 1 with list of MI focus areas) is not fully aligned with the IEA’s definition of “Low-Carbon Energy Technologies”. MI members also have varied baseline years. Because of the varying MI baseline years and technology scope, it is not possible to directly compare the annual growth in aggregate spend reported by MI members with the global growth in public RD&D investment in low-carbon energy technologies estimated by the IEA.

Following the launch of the MI initiative at COP 21 in November 2015, MI members identified 11   clean-energy technology focus areas and, based on their national interests, which topics were a priority for doubling their public R&D spend (see Table 1). For example, not all MI members opted to double funding on MI Focus areas such as “Nuclear Energy”, “Cleaner Fossil Energy”, “CO2 Capture, Utilization and Storage” or “Basic Energy Research”. An analysis across 11 members reporting to both organisations revealed that R&D spend in MI focus areas was about 70% of “Low-carbon RD&D” spend reported to the IEA, linked to priority areas for doubling investment.

In addition, MI members were also free to choose their own baseline year which were sometimes a specific year or an average of them (See Table 2). This means that the percentage increase in a given year of MI across all baselines will not correlate with the increase in investment from a single calendar year. 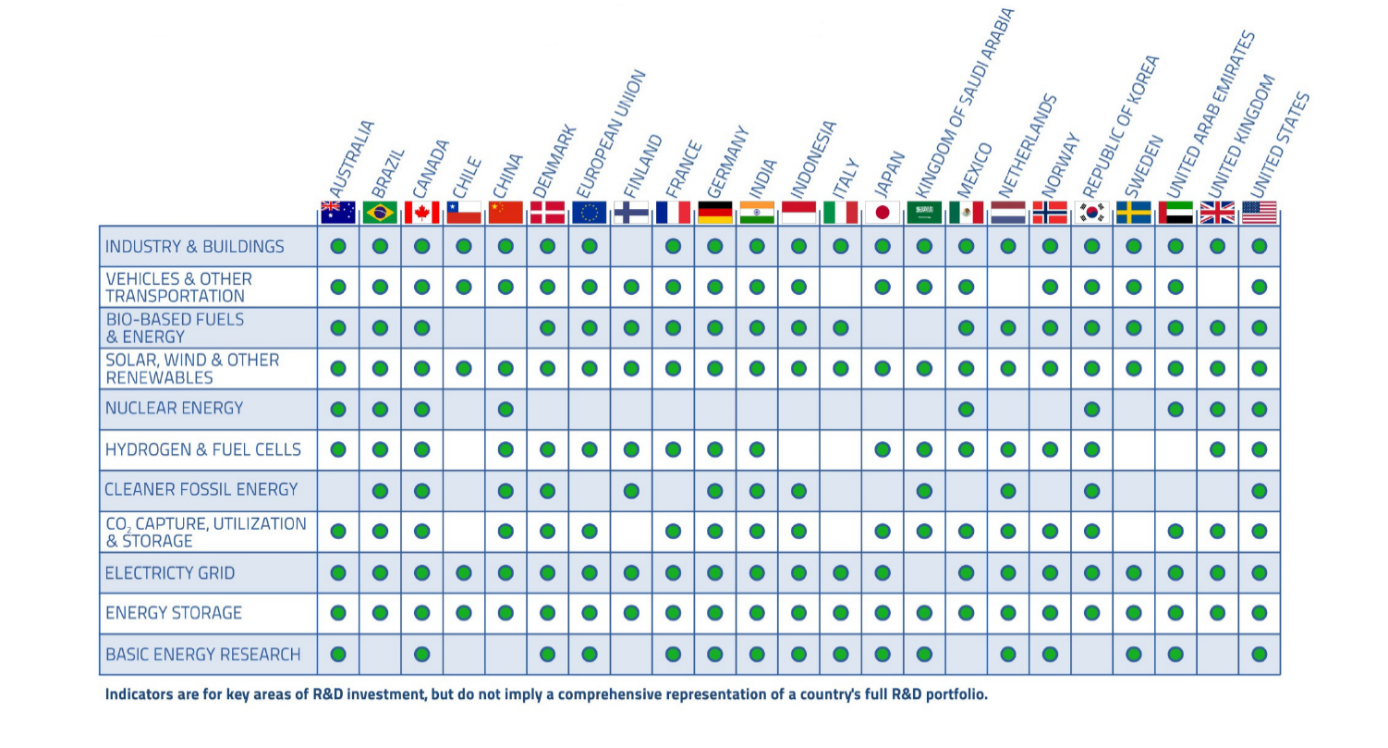 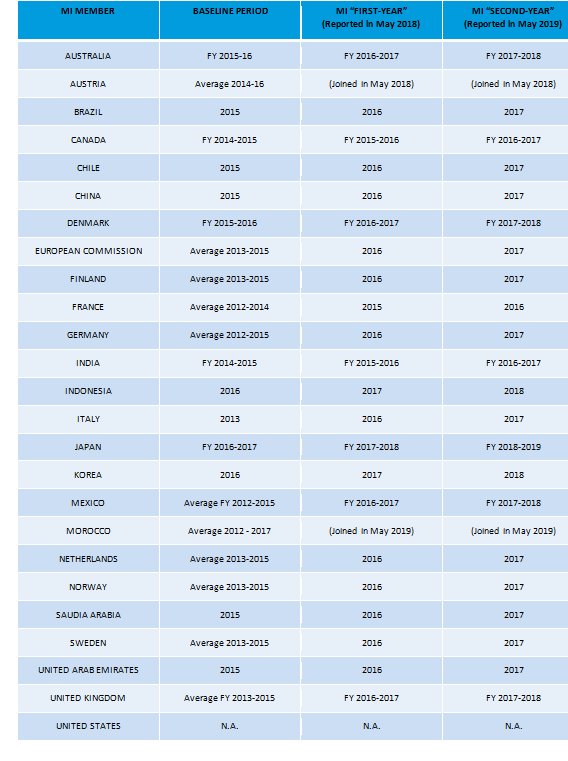 [1] MI members reporting R&D public investment figures might from year to year, so the baseline for MI members (as a whole) against which to calculate percentage increases of public R&D investment is not constant.