Find out more about the Carbon Dioxide Removal Mission.

The Carbon Dioxide Removal (CDR) Launchpad is a coalition of governments who have agreed to work together to accelerate the pace of CDR advancements through large demonstration projects and share data and experiences. It is the first “sprint” project of the CDR Mission.

Demonstration projects of 1,000 tonnes or more per year of CO2 removal are critical for driving down costs and scaling up CDR approaches. The Launchpad focuses on a portfolio of CDR approaches including direct air capture with storage, enhanced mineralization, and biomass with carbon removal and storage. In time, this sprint could expand to include additional carbon removal approaches.

First-wave members who have joined the Launchpad include Canada, the European Commission, Japan, Norway, the United Kingdom, and the United States. The Launchpad is a call to action and both Mission Innovation members and non-MI members are encouraged to join.

The Mission’s CDR Launchpad is an important step towards rapidly and responsibly bringing the carbon dioxide removal industry to giga-tonne scale, which the IPCC indicates is needed alongside deep decarbonization to achieve the Paris Agreement goals.. The efforts made by this coalition will help increase the number of pilot-scale tests and demonstrations of CDR technologies by ten times from 2022 levels within three years, and grow the number of full-scale commercial CDR demonstrations to more than a dozen within six years. 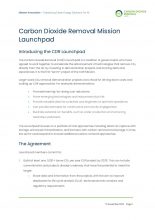